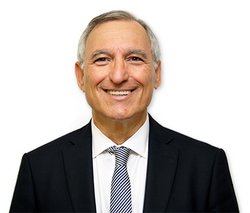 For the past 14 years, Dr. Stefanos Gialamas has been the President of the American Community Schools of Athens, Greece (ACS Athens, Greece) and also the founder of the gMp (Global Morfosis Paradigm) Organization. He holds a BS, an MA and a Ph.D. in Mathematics; the latter is from the University of Illinois at Chicago (Knot Theory). He has been a University Professor, Department Chair, Dean, and a Provost at higher education institutions in the United States and Greece.

He has taught graduate and undergraduate mathematics, computer, management and leadership courses at universities in Kansas, Wisconsin, Illinois, and Greece.

His professional work includes research in Leadership, Faculty Development, Innovative Approaches in Teaching and Learning, Knot Theory, Mathematics and Arts, the History and Philosophy of Mathematics, and Mathematics Education.

He has published more than 120 refereed articles in both English and Greek languages, four books, a chapter book, and many other manuals and hundreds of newspaper and magazine articles.

In response to the educational needs of society due to globalization, he has developed an authentic education paradigm, the Global Morfosis Paradigm, which has been implemented at ACS Athens for the past decade. This dynamic paradigm consists of three inseparable, interconnected, and interrelated components: the Educational Philosophy of Morfosis (μόρφωση), the i2Flex Delivery Methodology, and the Aristeia (Αριστεία) Leadership Approach guided by Ethos and Serving Humanity.

One manifestation of his commitment to serving humanity is the design, development, and implementation of the Youth-to-Youth Program over the past several years. This program focuses on educating unaccompanied refugee children in Greece. This authentic program has received international attention.

Under his leadership in 2007 and in 2016 ACS Athens received re-accreditations from the Middle States Association of Colleges and Schools (MSA), PA, USA. The president of MSA called ACS Athens “one of our highest performing schools’. ACS Athens is the first international school among 2700 international schools accredited by MSA using the highest level of protocol called “Sustaining Excellence”. This is a process that engages an entire school community in designing and implementing a school-wide research effort to identify areas for growth and improvement, to thoroughly examine the research into best practices in those areas, and to create new knowledge and best practices by conducting action research investigations during the process of implementing new initiatives.