... students in grades JK-9 with Greek citizenship are required to attend Greek Schools. In order to attend ACS Athens (Grades JK-9), these students must apply for permission to register at ACS Athens from the Greek Education Ministry...

As soon as parents are informed of their child's acceptance into ACS Athens, they will be requested to fill and submit the Registration Approval Application Form (Αίτηση Έγκρισης Εγγραφής). This form and all supporting documents must be filed prior to registration. 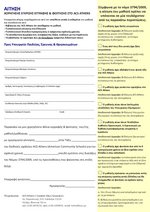 The following supporting documents are required, as applicable: