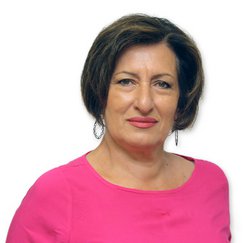 Ms. Tokatlidou has been a member of the ACS Athens community since 2005. Initially, as an IB Economics faculty, then as Director of IB and AP programs, as Academy Vice-Principal, and currently the Dean of Academics.

For more than a decade, Ms. Tokatlidou has worked along with the IB Diploma and AP Faculty in expanding and enhancing the IB and AP programs as well as the curriculum and professional development of faculty, making the IB Diploma program one of the most sought-after programs in Greece.

In 2019, she spearheaded the launch of ACS Athens Virtual, offering online courses. Ms. Tokatlidou led a team of educators and administrators to create a new curriculum while at the same time adapting the existing one. Currently in its third successful year, ACS Athens Virtual placed ACS Athens amongst the leading schools worldwide that incorporated and effectively applied technological developments in education that addressed different types of learners through an extended variety of courses. Further, ACS Athens Virtual helped create a framework for hybrid learning during the extended Covid-19 lockdowns of 2020 and 2021.

Ms. Tokatlidou strongly believes in learning and citizenship development through service,  innovative projects, and personal growth through education. This led to the development and creation of the ACS Athens Youth to Youth Educational and Social Integration Program in collaboration with The HOME Project organization. The program addresses the social and educational needs of unaccompanied minors in Athens that fled to Greece due to the Syrian civil war through a student-to-student partnership learning model running since January 2017. The program now includes the Part-time Youth to Youth that runs on Saturdays and involves numerous student and faculty volunteers, and the full-time Youth to Youth program run through the Ed Shapiro Foundation scholarships.

Ms. Tokatlidou, as an educator, strives for lifelong learning unconfined by physical proximity, global citizenship, effective risk-taking, and ethical decision-making. She has led various workshops and has published in numerous scientific journals.

Ms. Tokatlidou was born and raised in Drama, Greece.