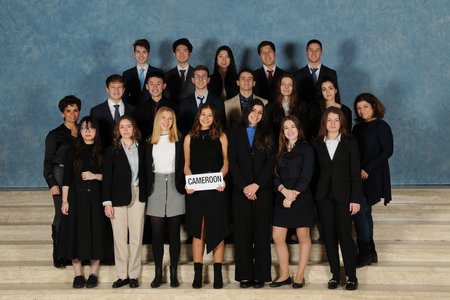 The THIMUN (The Hague International Model United Nations) conference is a five-day simulation of the United Nations for secondary school students, which takes place at the end of January each year in the World Forum Convention Center in The Hague.

The theme of the 2020 THIMUN conference is “Securing and Advancing Democracy: Every Voice Matters!”

The ACS Athens THIMUN delegation, together with Ms. Evelyn Pittas and Ms. Angela Chamosfakidis worked hard to ensure the top leadership positions granted by THIMUN, in a conference attended by more than 3000 delegates from around the world!

ACS Athens students, Marianthi Bitsikas and Marina Polios hold leadership positions in the Historical Security Council. Sofia Sofokleous serves as Chair of the 5th Committee of the General Assembly. Thaleia Kalai holds the position of Judge in the International Court of Justice and Marianna Sampson the position of Ambassador of Cameroon.

Everyone on the ACS Athens team devoted a lot of time preparing, before and during the conference, and working late every night to finish resolutions for the following day, as the issues shift according to the daily debating within their respective committees.