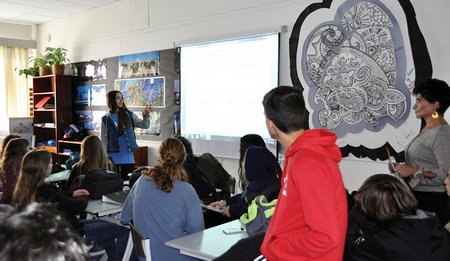 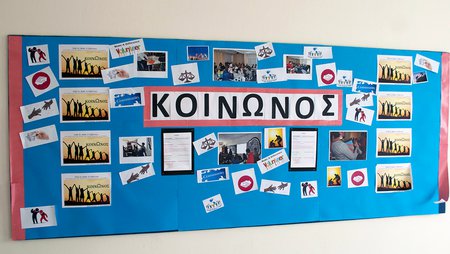 ACS Athens is proud to announce that Lydia Pinirou, ACS Athens graduate, Class of 2019, has been awarded the Educational Collaborative for International Schools (ECIS) inaugural University Scholarship. Ms. Pinirou will utilize the scholarship as a first-year student at the Royal Holloway University of London.

The ECIS University Scholarship is a £10,000 scholarship for first-year university students who graduate from an ECIS member school and is awarded for the first time this year, as an additional way for ECIS to promote international education.

Ms. Pinirou is honored with this distinction due to her exceptional community work for the homeless in Athens through the KOINΩΝΟΣ school-wide service club. As the founder of KOINΩΝΟΣ club, she inspired and led more than 70 of her fellow students to visit homeless at the center of Athens every Thursday, to provide personal company and serve food. KOINΩΝΟΣ guided and supported those socially vulnerable people, guiding them through trauma and conflict while addressing and protecting their human dignity. Due to the impact of her civic work, Ms. Pinirou was invited to speak with the students from Think Global School, who also joined her in her street work, and with post-graduate students in psychology at the University of Athens. She comments on her initiative: “it has taught me much, and it is work that I would like to continue at the university level, in order to best understand how to integrate marginalized populations into society.”

Throughout her work, Ms. Pinirou has demonstrated humility and resilience. As shared by her advisor, “all her personal ambitions were set aside. Lydia has an admirable inner strength. She finds ways to cope with challenges and does not harp on negative things. She has a strong sense of justice and fights for fairness. [...] Anyone who has worked with Lydia will attest that her character, aims, and values are of the highest calibre.”

The Executive Director of ECIS, Dr. Kevin J. Ruth, expressed his appreciation of Lydia Pinirou wishing her all the best in her future steps: “Her endeavor has created impact wide and far, aligning well with the ECIS mission of transforming lives through international education. As Royal Holloway University welcomes this extraordinary international school graduate in September, we have no doubt that the university will benefit from her great soul, which pushes her to question just how well we (as a society) have served the most vulnerable among us.

We wish Ms. Pinirou all the best for her continued studies, and we look forward to learning how she creates a positive impact in the lives of others, embodying the spirit of international education.”

As an ACS Athens graduate, Ms. Pinirou manifests the school’s educational philosophy to Serve Humanity and stands as a bright example for all ACS Athens community members.