The 2020 Sports Shoes Recycling Project was a great success! 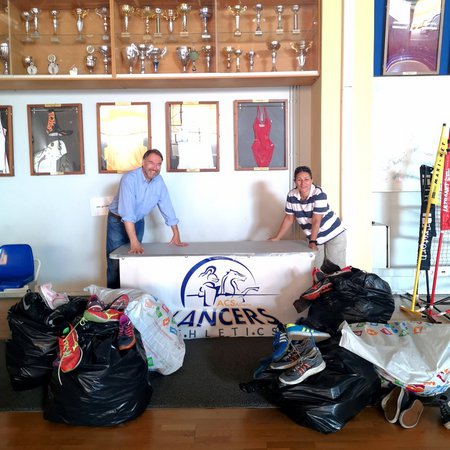 Mrs. Annie Constantinides, the ACS Athens Athletic Director and Mr. Kazantzopoulos, the President of the Institute Team of the World with the collected sports shoes.

The Annual Sports Shoes Recycling Project, that has been initiated by the ACS Athens Athletic Department and the Athletic Student Council, was yet again a success!

The ACS Athens Community responded to the project immediately, showing once again the value of social responsibility by supporting individuals in need. This year's effort was not limited only to our community; an invitation was sent to international schools that were involved in a number of international competitions hosted by ACS Athens. Unfortunately, due to the COVID 19 pandemic and the closure of schools, we did not have a chance to see the project come through as we had expected! Some international schools were eager in being involved and we would like to thank the American School of Warsaw as they contributed to our cause by bringing 30 pairs of sneakers during our swimming event!

The participating International Schools in collaboration with the ACS Athens community, managed to collect 300 pairs of sports shoes! We would like to thank everyone who contributed and made this project happen for one more year. The shoes were donated to the Institute Team of the World and will give the chance to less fortunate individuals to exercise and play sports again!