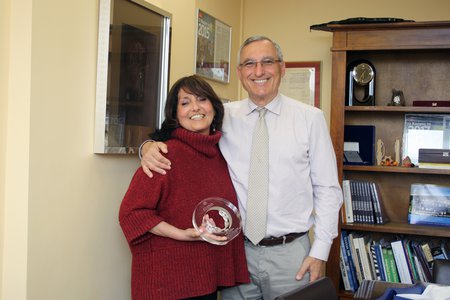 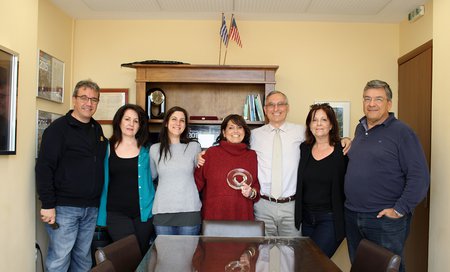 On Friday, May 10, 2019, ACS Athens alumna and coordinator of the Alumni & community online platform www.acsathensglobal.org, Belina Korovessis, received a special award "for her dedication and unwavering commitment throughout the years to the ACS Athens Global Association, connecting Alumni around the world." Dr. Stefanos Gialamas, presented the award to Ms. Korovessis, with members of the executive council and other administrators attending.

Dr. Gialamas congratulated Belina Korovessis and wholeheartedly thanked her for her dedication and tireless work throughout the years. Ms. Korovessis expressed her love and dedication to the school as she received the award.

The award was officially given to Belina Korovessis at the recent ACS Athens Alumni Achievement Awards Event, April 6, at Washington D.C. where it was accepted by the Athletic Director and alumna Annie Konstantinides on behalf of the honoree.

Ms. Korovessis has served ACS Athens through years at different posts, such as in Communications, Admissions, Alumni Relations, etc. Lately, she has focused her activity on developing the acsathensglobal.org platform which serves as the communication network of Alumni and Friends of ACS Athens worldwide. She’s one of the true holders of the legacy of ACS Athens through the years. Congratulations Belina!