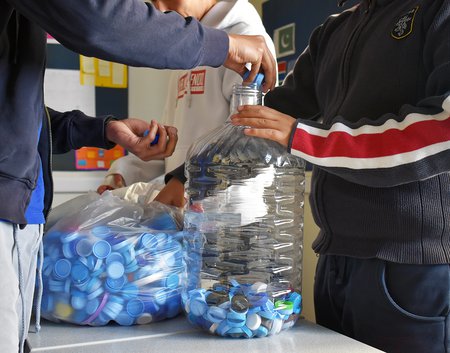 ACS Athens students, along with their Youth-to-Youth peers from The Home Project, and under the guidance of Bottle Cap Club coordinator, Mr. George Maltas, have joined efforts to collect as many bottle caps as possible to raise awareness to the broader community and promote recycling of unwanted plastic. The Club members aspire to reach the goal of collecting one ton and raising money for people who use wheelchairs.
Even in confinement, due to Covid-19, the Bottle Cup Club members were not discouraged and kept collecting caps. Furthermore, students Alexandra Grigoriou and Vasilis Krassas, created their own videos to promote the cause.
This is yet another exhibition of leadership by ACS Athens students.
At ACS Athens, we stay together!