Completion of MGL-A or equivalent 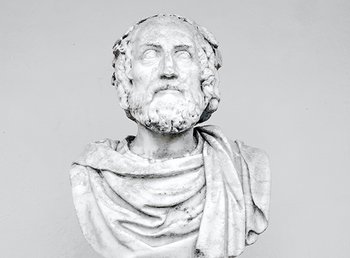 This is an online Greek course for learners who have completed at least two years of Greek. The four skills – reading, writing, listening and speaking – are expanded to a more advanced level. Students review and refine important grammatical structures while learning new vocabulary to communicate in Greek on a variety of topics. Greek culture and Philosophy are introduced with every opportunity. This course requires analytical thinking and use of the Greek language. Themes such as philosophy family, Greek civilization, technology, leisure, sports, health and every day’s life are discussed. Learning activities and different assignments are completed based on these themes. Innovative technology tools as flipgrid, voice threads, kahoot, youtube and many other, are used to make the learning process creative and joyful for students.

Dr. Fyrigou is a foreign Language Teacher (French and Greek). She earned a Bachelor's in French Literature from the Greek Capodistrian University of Athens and in 2008 she received her master's degree in the History of French Civilization again from the Capodistrian University of Athens. Dr. Fyrigou defended successfully her doctorate thesis in History of French Civilization on July 2012 and received her doctoral degree. The thesis title was "Antonin Proust et son voyage en Grece".

She has been working in the ACS faculty community since 1999 and has taught both in Middle School and High School. She is an IB teacher and an IB examiner in French language. Currently, she is an Adjunct Professor at the Hellenic American University in Athens, teaching undergraduate students in the department of interdisciplinary and intercultural studies.

She has established different educational collaborations between ACS Athens and other institutions worldwide. Dr. Fyrigou was one of the first faculty who participated and completed successfully the pilot program at ACS Athens, which started in 2013-2014 academic year. She has designed, developed and implemented a course in French language and culture based on the i2flex methodology and innovative teaching and learning approaches.

She recently authored a chapter in the 2016 publication "Revolutionizing K-12 Blended Learning through i 2 Flex Classroom Model." The title of her chapter is "Evaluating the i2flex educational experience via the Community of Inquiry (CoI 2000)" Tonia Fyrigou has also presented her work in different colloquiums and conferences.

Dr. Tonia Fyrigou is a life-long learner, an open mind person with ethos and values with innovative ideas who always strives for excellence in education.