Every year, a significant part of ACS Athens’ capital budget is dedicated to the upgrading of the facilities and infrastructure.

During the 2016-18 period, ACS Athens carried out several projects on campus, targeting the improvement of the premises and raising the standards, benefitting the learning process and all of the school’s community of learners.

ACS Athens is grateful to the people who shared our vision for continuous improvement and supported us to realize it with their contributions: 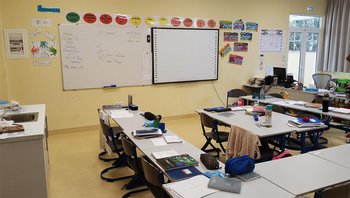 The Elementary School building has been renovated and redesigned to a great extent.

Renovations transformed all floors of the Elementary School, providing larger capacity, new spaces and additional classrooms, as well as an enlarged cafeteria area.

After the renovations, the Elementary School accommodates more students in a modern environment and well-equipped classrooms. The renovation project included the construction of three brand new classrooms, that have been evenly incorporated in the existing buildings: a new and modern art room equipped with the necessary infrastructure, a Foreign Language classroom and a new fifth-grade classroom. Moreover, after redesigning and re-arranging the internal space of the building, there is a new Writing Center, an additional ESL classroom, a Technology Lab, a new Counselor’s office, and a larger Cafeteria/Restaurant area; the existing space has also been utilized more efficiently, increasing the capacity of available classrooms to four per grade. 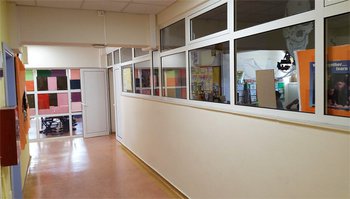 Apart from the building renovations, the network system was upgraded along with the associated racks and the rest of the technical equipment. In particular, all Elementary School network cabling structure was replaced by CAT6 Ethernet cabling and all network plugs and the Elementary School peripheral racks have been replaced by new ones.

The above upgrade provides a reliable network structure for the current and future networking equipment to cover the needs for at least the next 15 years. Computers, wi-fi access points, security cameras, and IP telephony, rely upon the networking cable infrastructure to operate efficiently. Also, the Elementary School is now ready to upgrade to IP telephony. 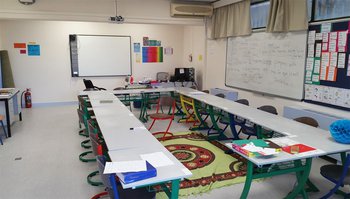 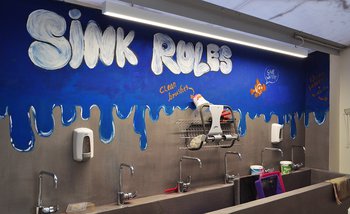 A brand new office space was created for the Summer Camp needs; the construction took place during the 2017 Spring break. It is an area of about 45m², located on the ground floor next to the administration building, consisting of three independent rooms: a waiting room, an office, and a small storage room. It is surrounded by a small garden and a few tables and chairs placed under a canvas awning, providing a pleasant outdoor waiting area to the parents.

This area, centrally located, is also used throughout the year by the Athletics/ Recreational Programs department. 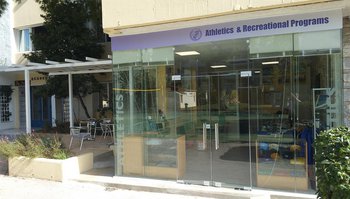 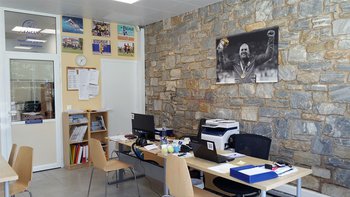 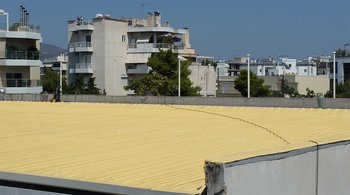 The school completed major waterproofing on the roofs of certain buildings, with the use of high-standard insulating materials. Facilities affected include the gymnasium, the Middle and High School Art rooms, the Theater atrium and the Weight room. Moreover, the Middle School and High School Art room balcony has been renovated to a great extent; the balcony floor has been paved with anti-slip tiles, and a thermal insulation layer has been installed at the roof of the building.

The roof of the gym, a challenging especially during heavy rainfall, was treated with high-standard materials and techniques, combining asphaltic-based and polyurethane-based modern materials that have provided excellent results. 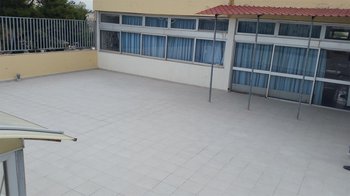 The Reception office has been redesigned and relocated to the ground floor of the administration building. The area has been renovated to provide a practical and functional reception area to the visitors. 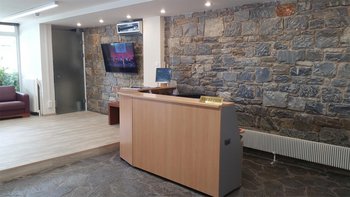 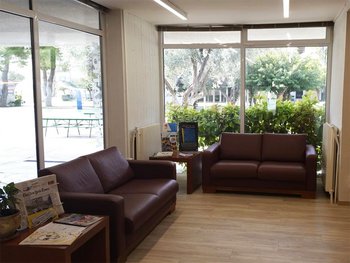 The “Incubator of Students’ Creative Ideas” (ISCI) is a specially designed new area in our main library, to facilitate the needs of our children for creative thinking and studying. The room is equipped with two state-of-the-art Windows PCs and one iMac, that provide our students with the appropriate tools to work on their creative ideas. An RFID lock controls access to the area, and a designated group of students manages the operation of the facility.

The main objective of this program is to provide our students with a “space,” which they manage on their own and offers them the possibility to create and innovate. 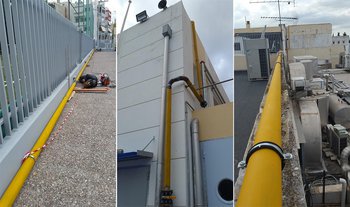 During the summer of 2018, the school implemented the use of natural gas for its heating needs in the following areas: the Elementary school, the Annex, the Middle school, the Administration building, the Art rooms, and the Academy.

Two major gas stations that are capable of supplying the entire campus with natural gas have been installed. While designing the critical infrastructures, the future needs of the campus were taken into consideration. More specifically, the new installation has the potential to supply the rest of the buildings as well as the swimming pool water heating system with natural gas. The completion of this project will take place next year.

New pipelines have been installed, supplying the buildings mentioned above with natural gas. Safe use of natural gas is of highest priority; therefore during construction, all the technical standards imposed by the legislation were exceeded. All precautionary measures were taken against fire, by installing an alarm system against gas leakage connected to main electro-valves, which automatically shuts down the main gas supply in case of a leakage, equipment to monitor the gas pressure and a good ventilation system in the boiler room. 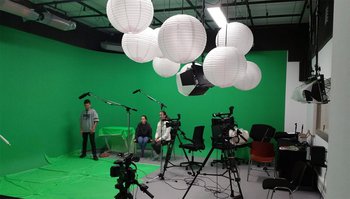 ACS Athens is proud of its state-of-art Media Studio. This new video/audio production facility allows the school community to produce live television programs and broadcast them over the network as well as through live streaming. The media studio offers the opportunity to the students to get involved in all stages of video and movie production. Media production equipment can provide a virtual set that can simulate any environment utilizing “green screen” technology. 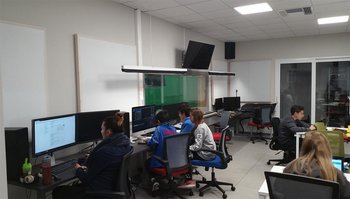 It can also accommodate up to 10 student workstations in a classroom setting located in the control room of the studio. This facility has enabled the school to enhance its curriculum with specialized courses “script to screen,” operating within the i²Flex educational platform of the school. Students from 9-12 grades participate in these courses, but classes throughout the school (ES/MS/Academy) benefit from media components produced in the Media Studio. 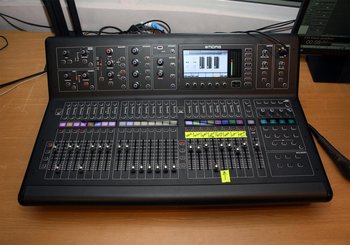 Reaching its 13th continuous year of operation, the Theater at ACS Athens has been in need of a technological upgrade.

After the acquisition of a High Definition, Digital, Twin lamp data projector (Panasonic PT-DZ870), back in January 2016, the time had come for an upgrade in the theater audio equipment and move to the digital era. In September 2017, a new digital mixing desk (MIDAS M32) was purchased in replacement of the old analog Midas Verona 48. The upgrade was completed in December with the purchase of four digital wireless microphones of the latest technology (SHURE Axient Digital) equipped with state of the art DPA headsets.

Upgrades in the lighting equipment and all video infrastructure (cabling network) are planned for the near future.

A major part of the computer server infrastructure was upgraded in 2017-18; a new server cluster offers expanded virtual services. Practically, this means that when one server fails, another one takes over allowing users to have continuous access without any interruption. The file and database servers are now hosted on the new cluster. The new server cluster has increased efficiency and productivity due to its higher storage capacity.

Continuing from 2016-17 boiler-rooms renovation, the upgrade of the Elementary school boiler room was completed in 2017-18.

For the renovation of the new boiler room, modern and updated design techniques and technologies were implemented, incorporating energy-saving tools and equipment.

All old boiler rooms of ACS Athens are now renovated and upgraded.

A few representative pictures of the boiler rooms before and after renovation are shown below: 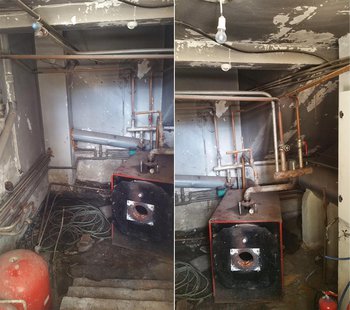