I am not the type of person to refuse to grab a unique opportunity when it is presented to me; I constantly strive to work on what makes me passionate and engaged. This value emerged as I was scanning through my new emails on a warm summer day and one title stood out in particular: “Unique opportunity to interview an ACS Alumna running for Congress.” I was intrigued by the idea, however, could this be true? Could I really have the opportunity to interview someone running for United States Congress? To my surprise, I quickly found out that yes, this was true, the opportunity was bestowed to me by my teachers. A few email exchanges and hours of research later, on Thursday, July 24th, I had the utmost honor to interview Ms. Natalia Linos, a social democrat running for Congress in Massachusetts’ Fourth Congressional District.

Natalia Linos is a Greek American born in Cleveland, Ohio. She is a social epidemiologist, an experienced public servant, and a mother of three. Growing up, Natalia had a passion for health and she was destined to pursue a career in medicine; her dad is a surgeon and her mom is an epidemiologist. After performing some initial research on Ms. Linos, one question quickly dawned on me: how does someone who is passionate about medicine decide to run for Congress? After sitting through an interview with Ms. Linos, along with the supervision of Ms. Carla Tanas, the Dean of the Institute, I am ready to share the answer to this daunting question.

Perhaps I did not make one thing clear enough: Natalia Linos attended ACS Athens when she was younger! As psychology strongly suggests, the environment which a child grows up in greatly affects the child’s perception of the world around them. Ms. Linos is no outlier to this fact.

Question: Do you believe the fact that you attended an international school, ACS Athens, influenced your perception and your drive to fight injustice, and, if so, to what extent?

Answer: Yes, I certainly do. I think one of the main ways that injustice works is through discrimination. In the US, it’s around racism, it’s this discrimination against different groups. In Greece, it could be around Roma populations or people of other ethnic or religious backgrounds. I think the fact that our school was so diverse, included people of many religions, people of many linguistic backgrounds, and many ethnicities, allowed me to break down the isolation that allows you to have these views of the other being inferior. Fundamentally, I see inequities as not about personal failures or inferiority of one group versus another, but just as a failure of our society, of our laws, of our systems, to provide the same conditions for everyone. I think ACS is one of the most diverse schools in Greece. It gave me the opportunity to have these conversations and friendships.

“Fundamentally, I see inequities as not about personal failures or inferiority of one group versus another, but just as a failure of our society, of our laws, of our systems, to provide the same conditions for everyone.” 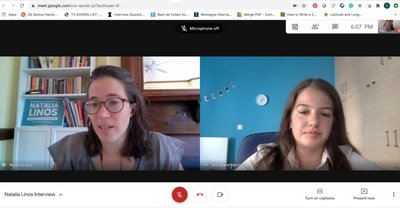 Following her graduation at ACS Athens, Ms. Linos attended Harvard University, earning her Bachelor of Arts in Anthropology, her Master of Science in Social Epidemiology, and Doctor of Science in Social Epidemiology. When asked about her reaction when she found out that she had been accepted into Harvard as a senior at ACS Athens, she stressed the importance of not worrying too much regarding the name of a university; she believes that there are multiple universities that may not be as prestigious as Harvard, but can still provide someone with a valuable education.

Question: You have been the Executive Director of the FXB Center for Health and Human Rights at Harvard University since September 2019. What exactly does this position entail, and what has working in this position taught you?

Answer: This center is an interdisciplinary center; it has professors and faculty of law, of medicine, people who work on human rights from a holistic perspective, not just doctors or public health officials. There is a lot of knowledge that is produced in academic institutions like Harvard, but that knowledge doesn’t always translate to change in terms of policies, because, people write academic papers and publish them in journals that nobody reads outside of academia, so the role of that center, we call it an action-research center, is to do some of that translational piece, making sure we’re writing articles and ensuring that we’re communicating directly with the public, as well as policy makers. In Greece, we do work on the refugee crisis. There’s some of the faculty that do work there, we work on COVID-19 and racial inequities right now, there’s work been done on climate change and migration, so there’s a lot of different thematic issues, but the focus is recognizing that health is not shaped just by whether you have access to a doctor, but also about human rights, discrimination, poverty, and all the conditions outside of the healthcare system.

“There is a lot of knowledge that is produced in academic institutions like Harvard, but that knowledge doesn’t always translate to change in terms of policies.”

Nevertheless, the question of why a scientist would run for Congress was still dwelling in my thoughts. After all, only 14 out of 535 members in Congress are scientists. As quoted by Ms. Linos, “You can’t hope that politicians will listen to scientists; we must elect them. That’s why I’m running.”

“You can’t hope that politicians will listen to scientists; we must elect them. That’s why I’m running.”

Question: You said you had a passion for health growing up, however, what was the single event that inspired you to run for Congress? How did you make the leap from science to running for Congress?

Answer: I have been in a lot of political spaces, and I don’t know if, Ann Marie, you do MUN, but I was doing MUN when I was your age, and I worked for the UN for a long time (for 10 years). In those spaces, I have been in meetings with prime ministers, with ministers, I have gone behind the scenes hearing how politicians debate and discuss priorities. It's been very exciting. I’ve worked with the former prime minister of New Zealand, Helen Clark, as her speech writer, the former vice president of Costa Rica… I have always been interested in the political space and how important that is… Women leaders have been mentors to me, but I was quite happy doing work outside of politics, like working at the UN. But, COVID-19 hit. And, in Greece, it was managed pretty well, but in the US, it has been a disaster. It has been a disaster despite the fact that we have the best doctors, the best hospitals, even the best public health professionals. The irony there has been so strong and so clear that it’s a governance failure, that it was the administration that failed, that politically, we needed more people with a science background to help guide us. That’s why I decided to run.

“We needed more people with a science background to help guide us. That’s why I decided to run.”

Finally, one of the last questions I asked Ms. Linos was regarding extracurricular activities she had participated in at ACS Athens. Although this may seem like a misguided question, her answer made me realize how ACS Athens, as a diverse international school, equips its students with knowledge and the mindset necessary to excel later in life. Years following her graduation in 1999, Ms. Linos still nostalgically remembers the inclusive environment of ACS Athens, the long lasting friendships she created, and how ACS Athens truly promotes all types of learning.

Question: Were there any extracurriculars that perhaps made you think that you wanted to study medicine or shaped your thinking into what it is today?

Answer: No, I’ll tell you the opposite. I did a lot; I did choir, music, I was into orchestra… I always played sports. I was never a top athlete but I played basketball and soccer with the ACS teams. I think those are just as valuable experiences and I think that’s what was unique at the time. I don’t know if it’s more common now, but, at the time, ACS was one of the only schools that had both academic excellence and a huge array of other activities that students were getting engaged with. What is more common in the US is that if you’re an athlete that’s all you can do, because you train 4 hours a day, whereas at ACS it was more like you can be both an athlete and an MUN person, and it was okay if you weren’t the top athlete. I liked the way ACS embraced and allowed people to explore their interests without feeling like you had to be amazing in something in order to participate; it felt quite inclusive. I do want to add that a lot of the alum from ACS are engaging with me right now in this campaign. I graduated in 1999, so that’s 21 years ago, and still people are engaged and excited. I do believe there is something about ACS and the community that it builds. I’ve reached out to a few older alums and younger alums and even a professor here at Harvard, called Nicholas Burns, who used to be ambassador to Greece. His daughters graduated from ACS and I spoke to him yesterday, he said, “Any ACS alum I’ll support!” So it’s kind of that notion of a shared experience. I was also in student government for a little while. Anyway, the ACS community is an important one, and it still is. I still talk to some of the teachers. Recognize that as something, and in a few years you’ll reach back to some of your ACS friends.

“I liked the way ACS embraced and allowed people to explore their interests without feeling like you had to be amazing in something in order to participate, it felt quite inclusive.”

After talking to Ms. Linos about her experience regarding ACS Athens, I asked her a final question.

Question: What advice would you give a young person that wants to pursue a career in politics?

Answer: No one is ever too young to become involved in politics. I think there is value to being engaged, because decisions that are being made today will shape the future that you will live in tomorrow. It’s important to have political engagement and conversations, and to say that “I’m not political” doesn’t get out of the fact that the laws, the rules of a country are going to influence your life, so there isn’t really “I’m not political.” Everything is political.

“Decisions that are being made today will shape the future that you will live in tomorrow.”

By the end of the interview, it was crystal clear that Ms. Linos is a perfect candidate for raising the number of scientists in the US Congress, considering her willingness and passion to serve her community. As a student, it is evident to me that the values Ms. Linos was taught in the diverse and inclusive environment of ACS Athens have helped her achieve ambitions throughout her career. On behalf of all ACS Athens, I would like to wish you good luck with your campaign, Ms. Natalia Linos! It was a pleasure to meet you and I wish you the best in all your future endeavors.