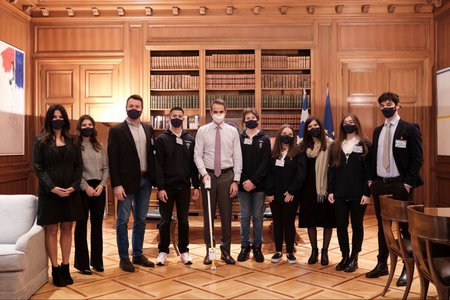 The "Plaisiobots" team represented Greece at the International Robotics Olympiad (IRO) in South Korea, winning the gold medal for Greece in the competition on "Robot: The Future Transport".

Plaisiobots won first place for building "Buddy the Cane", a robotic cane, designed to help visually impaired people. The cane, which is specially designed for outdoor areas, recognizes obstacles and their position, protecting the user while at the same time communicating with the traffic lights to inform the user whether they are green or red. The cane also has a BlueTooth tracking application.

The Plaisiobots team was welcomed by the Greek Prime Minister Kyriakos Mitsotakis, who enjoyed a demonstration from the team and congratulated everyone, commenting that "you make us all, extremely proud".

Congratulations to the team and coach, and of course to our very own Jason - for making us all, indeed, extremely proud!